After a crazy-busy month of work, I was able to take a long weekend off with Rick to check a major item off our bucket list: Machu Picchu. MACHU PICCHU!! It even sounds exotic, like travelers can’t visit without a whip and a satchel. I can’t wait to tell you all about it, but first I have to tell you how we got there.

The Journey to Start the Journey

The abandoned Peruvian town may host more than 1 million visitors each year, but it’s still not easy to get there—at least, while working on a long-weekend timeline. From New Orleans, we flew to Panama and then to Lima on Copa Airlines (a nice flight, despite the blatant rip-off of the Continental/United Airlines logo). After three whole hours of sleep, we flew from Lima to Cusco on Avianca Airlines, and then took a death cab past miles of feral dogs and open-air butcher’s shops to get to San Pedro train station. 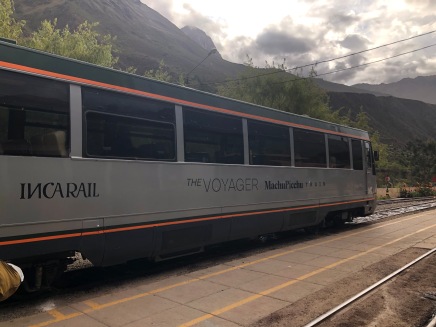 There was a brief moment of panic at the airport, when, checking in for our train we were told there was an 8 kilo (17 pound) limit on bags. We each had a backpack and a roller bag, putting us well over the limit. Immediately after, the same man who told us we were in violation told us not to worry—which of course was impossible. We headed to the train station, very concerned we were going to be asked to leave our belongings on the platform, but magically, everyone’s bags fit on the train and away we went.

The Inca Rail was a great ride: small, but clean and designed with large windows that allowed you to take in the unbelievably steep Andes mountains. One day when I am a zillionaire, I will try and experience the trip in the first-class cabin, complete with attached bar car and restaurant. This trip, though, we were in coach, which was still quite accommodating.

The train was an eclectic mix of lifelong travelers and day-trippers, families and couples. All the real backpackers were hiking the Inca Trail, a four-day trek that spends an alarming amount of time directly on the train tracks. Our four-hour (well, eventually six-hour, because of a delay) trip offered dark chocolate and zero walking, and we were just fine with that. We took the Inca Rail from Cusco through the mountains to Aguas Calientes, the last stop.

The view as you disembark the train at Aguas Calientes

Because of that delay, we got into Aguas Calientes and ran to our B&B. We had purchased the last entrance of the day, and our tickets to Machu Picchu were already starting. In spite of the urgency, it was impossible not to notice how cute the town is. Wedged between the river and the mountains, its shops and restaurants spread upward while fighting back the jungle that threatens to overtake it at every turn. 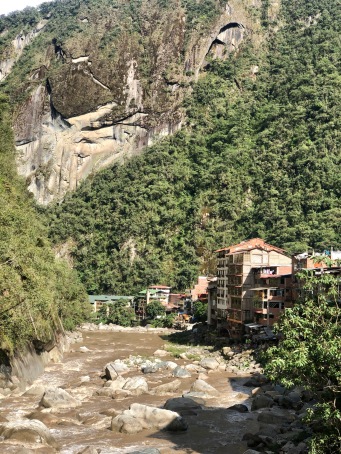 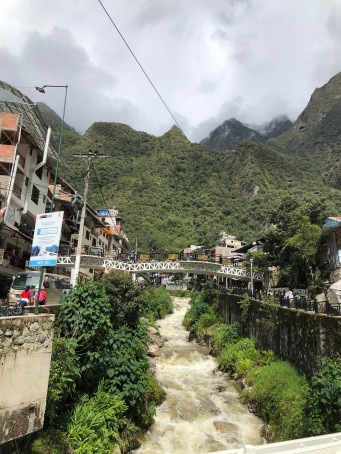 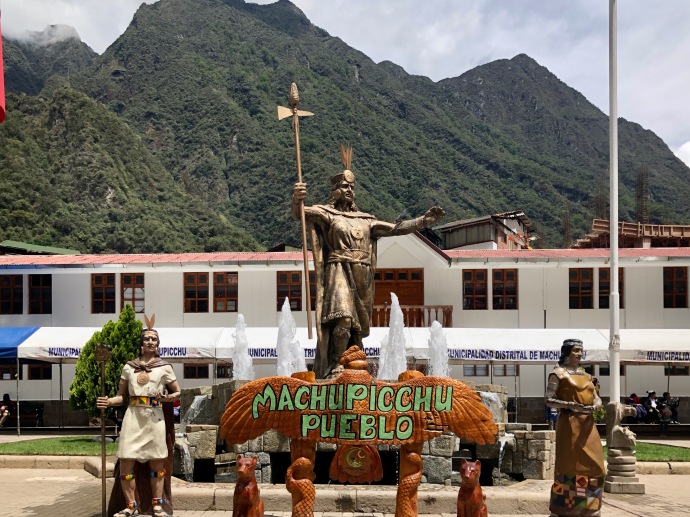 Aguas Calientes, sometimes referred to as Machupicchu Pueblo, is a walkable, shoppable town built for a variety of budgets and appetites. Hostels abound, but there are also rooms going for $400 a night. We chose neither and our stay at the Susanna Inn was lovely. Susanna runs a great place right on the Urubamba River, and $80 got us a large room overlooking the water, with treated glass to muffle the roar. Breakfast offered everything from pancakes and pastries to eggs and fresh juices, all included in the rate. With a friendly staff and excellent location, it was exactly what we wanted.

After exploring Machu Picchu, we were wet, hungry, and running on three hours’ sleep. We stopped at Toto’s House because it had the best view of the water and was also closest to the bus stop. These are not generally good guidelines by which to choose a restaurant, but in this case it worked out. It was early enough in the evening that the backpackers weren’t out, and rainy enough that the mosquitos weren’t out. Toto’s is a huge place that caters to the lunch rush with a buffet, but at 6pm we were the only ones in the restaurant.

Peru is not known for its wine, nor should it be. Their pizzas are essentially crackers and cheese. Alpaca tastes like dry, cheap beef. But the quinoa! The lamb! The Cusqueña beer! Those are definitely worth indulging in.

After steak and rack of lamb, herbed veggies and quinoa risotto, we mustered up the strength to stop at one of the many bars lining the river. We joined the crowds at Alpakitay Resto-bar until it was officially dark and we could go to bed, like the party animals we are. 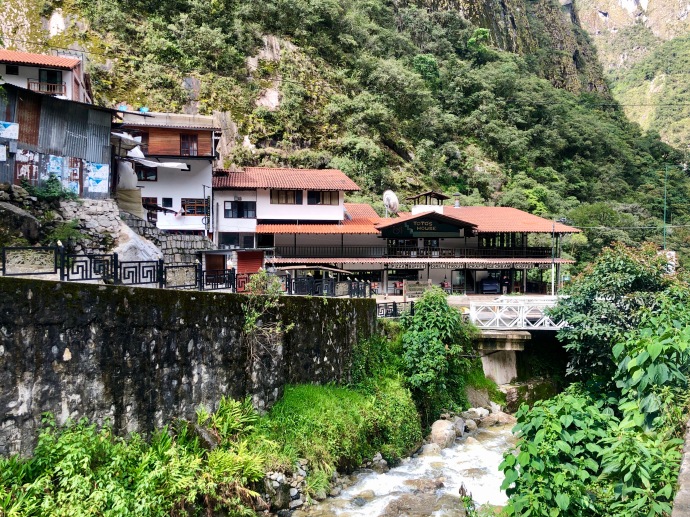 Getting Back to Cusco

Our trip back to the airport was different. Because of the timing or an ancient Quechuan curse, we couldn’t take a train back to Cucso. Instead we took a train for about an hour and everyone got off at Ollantaytambo (another backpacker town in the Sacred Valley with ruins of its own), hopped onto small buses and drove to the train station. Despite the inconvenience, it was a wonderful way to see the interior of Peru. The mountains were still large, the elevation still two miles high, but there were wide plains, deep-blue lakes, and farms scattered around against winding roads. We would have missed it all entirely had we taken the train back the same way we came. The curving roads and high elevation are not for the faint-stomached, though: we had to pull over for someone to be car sick.

Remember not to flush your toilet paper. None of Peru’s septic systems are designed for TP. It’s an odd habit to get into, so keep it top of mind.

Don’t bring a big bag. There’s no room on the Inca Rail for big bags, and if they think you’re carrying too much, they’ll make you leave things at the train station.

Consider your travel itinerary. There are a ton of different ways we could have sliced this travel apple: spent the night in Cusco first, taken a bus, hiked at least one night on the Inca Trail, stayed another night in Aguas Calientes and skipped the bus ride…. Our trip was short and so we had to be as efficient as possible, but find the schedule that works for you.