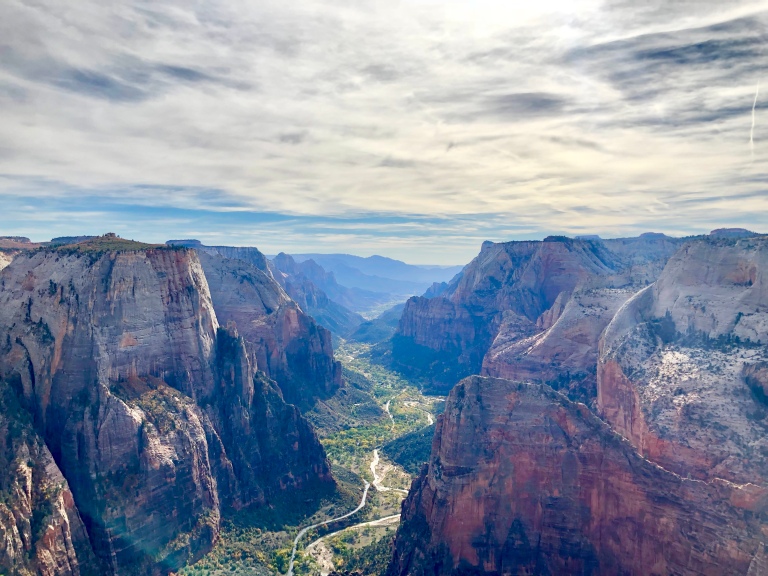 Last weekend Rick and I went to Zion National Park. I’d seen the park for years in pictures and film and had been itching to get out there for forever. We ended up flying into Las Vegas and making the three-hour drive. (There is an airport in St. George, UT, about two hours closer, but there weren’t any open seats getting in. Fall is a busy time for Zion.) Thanks to the late flight, the drive, and the time zone difference, we crawled into bed at 2:30am. Fortunately we were staying at the very cute and very close Bumbleberry Inn, which meant we could sleep late and still get to the park at a decent hour. Our hotel was close enough that we could have used the shuttle to get into the park, but it turns out it’s cheaper to drive your car in. We’re not sure why, though: there are like nine parking spots in the whole park. We ended up parking along the road and hoofing it to a shuttle stop inside the park. In Zion, only the park tram can use the roads most of the year.

Fall is the best time to go. The weather was a perfect 70 degrees, the leaves were changing color, and flash floods weren’t an issue. Unfortunately, that means everyone else in the world goes to Zion in the fall. The place was packed. The parking was packed. The trams were packed. The hikes were packed. But I’d picked a hike that was less popular and still fun: Hidden Canyon, a 3-mile winding hike that promised a moderate number of switchbacks and then a big slot canyon to explore. And then on our way there, the tram driver said that Hidden Canyon was closed.

This is when I got cranky.

This stupid park was too stupid crowded with stupid other people and I didn’t want to do another stupid hike. I wanted my Hidden Canyon. Pout. But obviously we were getting off the tram somewhere and hiking—otherwise we wouldn’t get our boom wine—so we had to pick an alternate adventure. The first choice is Angel’s Landing, a tough 5-miler that involves using chains to get to the top, but it’s also the most popular hike in the park, and there was no way this cranky bear was choosing to be around more people. So we went with Observation Point.

It’s an 8-mile roundtrip hike to reach Observation Point and get back down, with a 2,300 foot gain. We aren’t in the habit of doing hikes that long—in general, we like 3 or 4 milers, because we are adventurous but out of shape. Still, 8 miles didn’t seem that long, and I have no concept of what elevation changes mean (2,300 ft is like 300 feet per mile, right? That can’t be bad). The park info said it was a 5 – 6 hour hike. We had all day, and weren’t planning on winning any races, so we began the trudge uphill.

Thankfully, every turn on that hike was gorgeous. I mean, breathtaking—and not just for the elevation gains. I got over being cranky real quick and focused on the incredible rock stratification, the autumn colors, the walls that went straight up. After about ¾ of a mile you finish the boring switchbacks and move into a fun area of slot canyons. We played around in these for a while, taking pictures and catching our breath. Then it was a long, long climb up. Everybody passed us—the overweight, the underage, the elderly—but we put our heads down and kept going. We finally reached the top of the mountain, but weren’t quite done yet. Spoiler alert, there was still another mile of walking to get to the point proper. Fortunately, it was pretty flat. Victory was just around the corner. 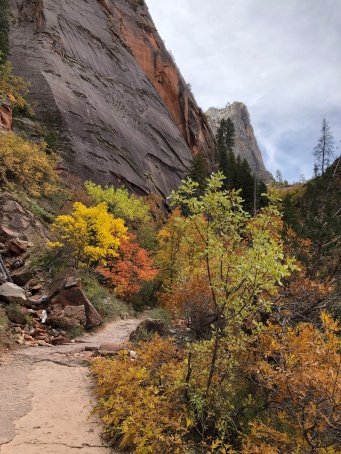 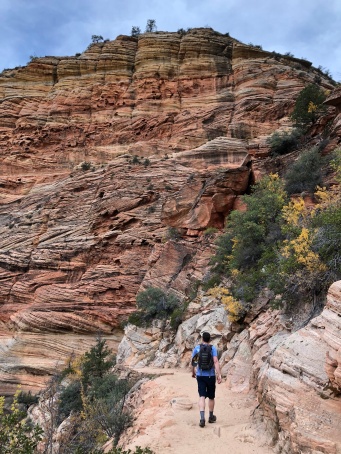 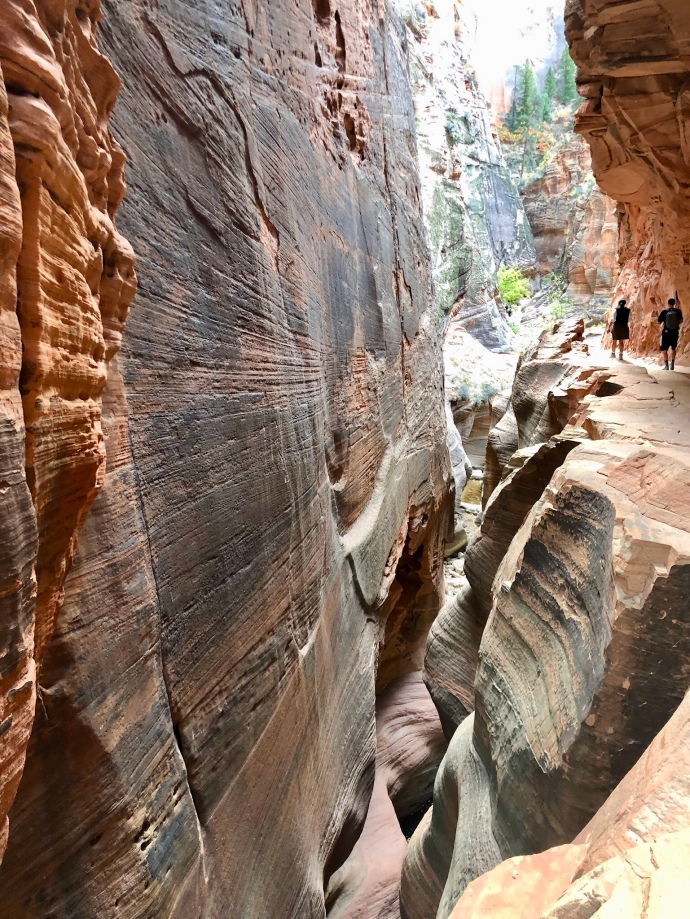 We eventually crawled our way to Observation Point. It was beyond beautiful. We were also beyond tired. So we snuck to the side, found some shade and celebrated with wine and cheese. After we were fed and rested we took pictures. It was pretty busy at the top, too busy to drone, so we moved back around where we had lunch and tried to capture the scale of the landscape. 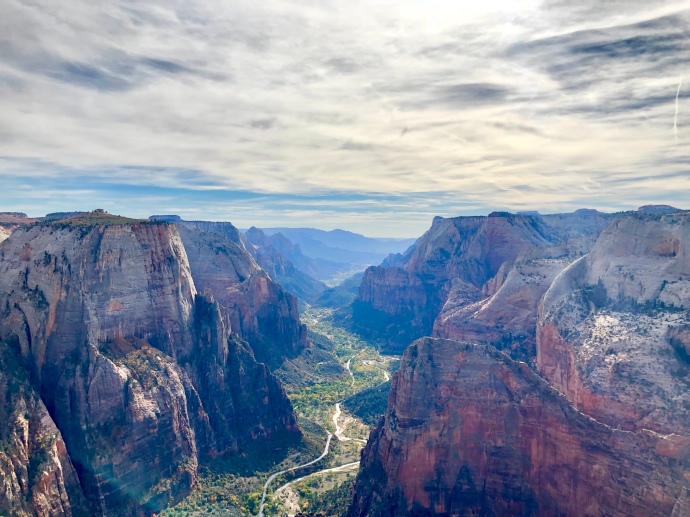 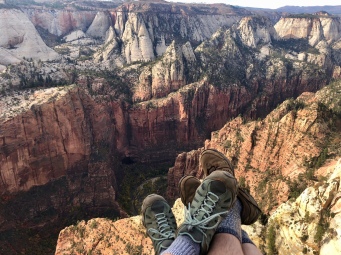 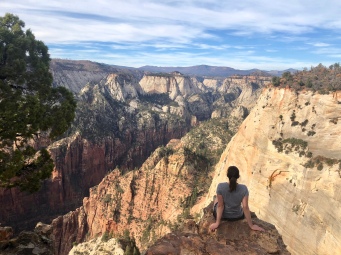 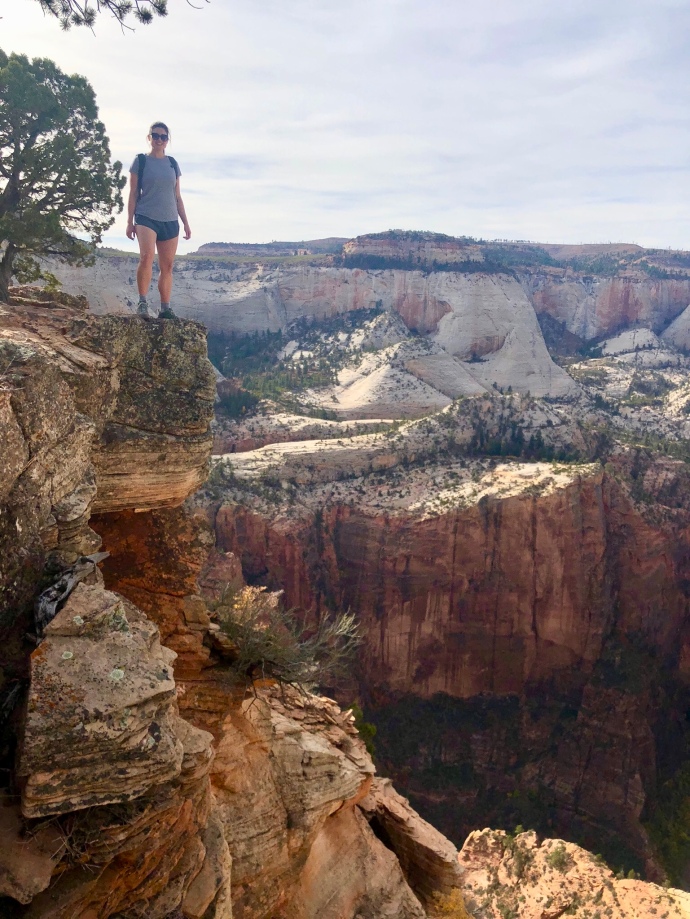 Then there was nothing to do but go back down. We aren’t very good at going down—my knees hurt and Rick’s old hiking shoes wear out his feet—but there weren’t any escalators that we could see, so down we went. We were rewarded handsomely for our efforts: being slow meant everyone else was already off the path. The rocks were drenched in late afternoon light and we had the place to ourselves. We took a million-ety pictures, none of which captured how beautiful the hike was, and made it out on one of the last trams of the day. 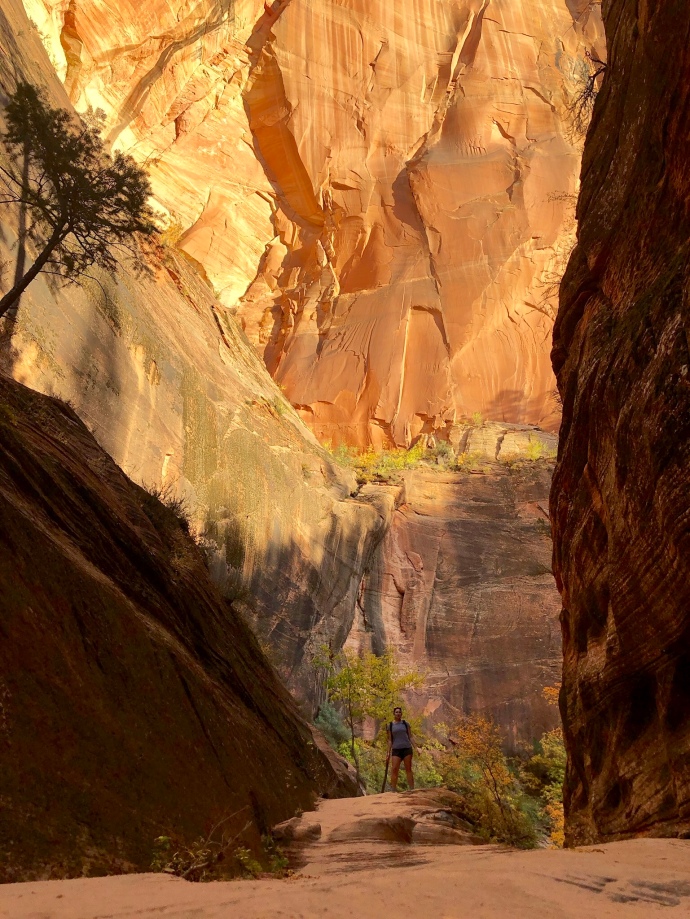 We ended the day in the hot tub, ate a huge steak dinner in the hotel bed, and slept for eleven hours. Our calves may never forgive us, but at least we got the pictures. 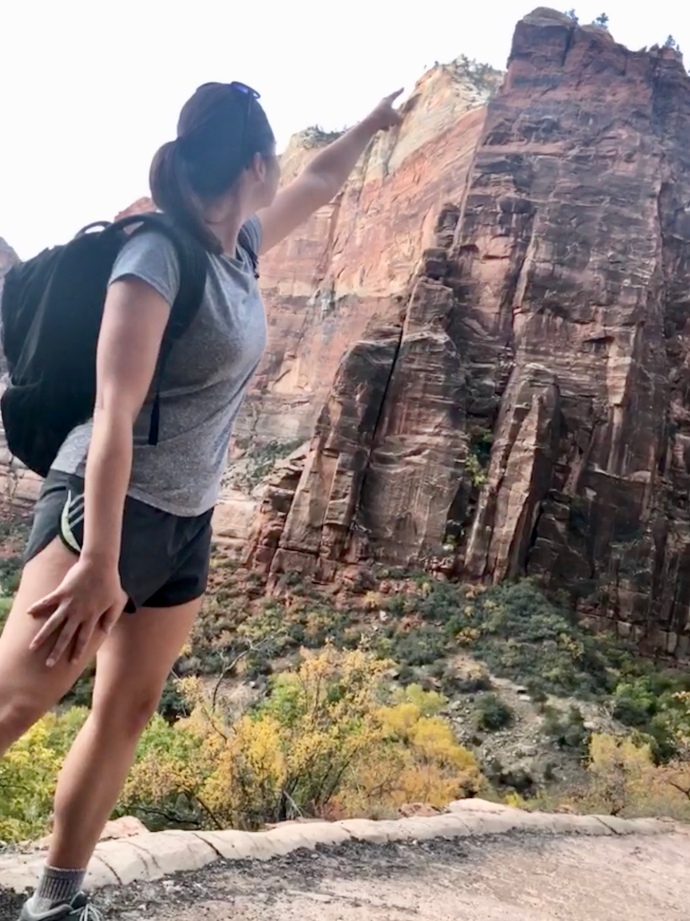 We hiked to there! On purpose!