On our last full day, after our full-full day, we needed to explore the outdoors. We packed our sunscreen, our drone, and our commitment until not coming home until the streetlights came on (Xennials, you feel me).

Straight up now tell me

Victoria Peak is a pretty metaphor for all of British occupation. 1841 to 1997, only European ex-pats could live on The Peak, making it the city’s most exclusive neighborhood. Now it’s open to everyone, but has denigrated into the worst sort of actual-worthwhile-place-slash-shopping-mall-slash-tourist-destination.

With that storied history in mind, we got off our tram and exited…right into a four story shopping mall. FFS, there is a literal Bubba Gump’s at the top of this view in Hong Kong. This was more offensive than the Christmas music in the Buddhist village.

We skipped paying for the viewpoint at Sky Terrace 428. I’d been up here once before, and was positive I didn’t want to spend my money looking at air when it was free 30 feet away. So we ran the IKEA-like rat trap that was the mall exit, we headed straight to the Lion’s Pavilion.

This place is seriously 50 yards from the mall (although they are building a new mall in between!) and we were early enough that it wasn’t too crowded. Turns out we had lots of expensive beer to blow that savings on, so I’m really glad we didn’t pay for the view. 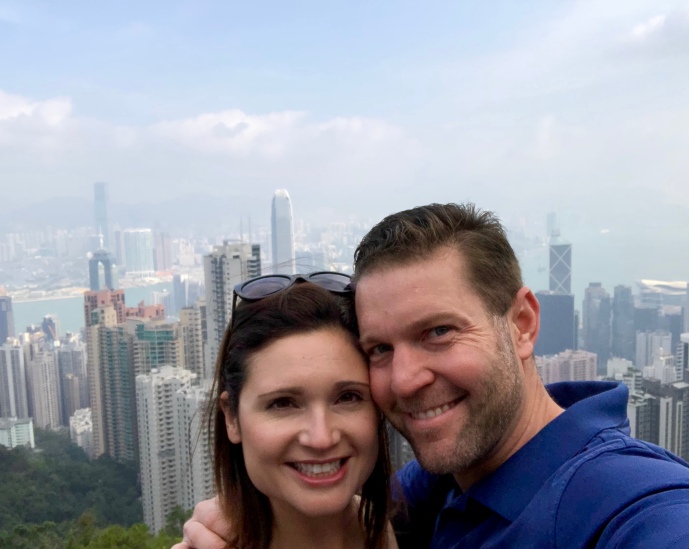 The view from the Peak without our faces! 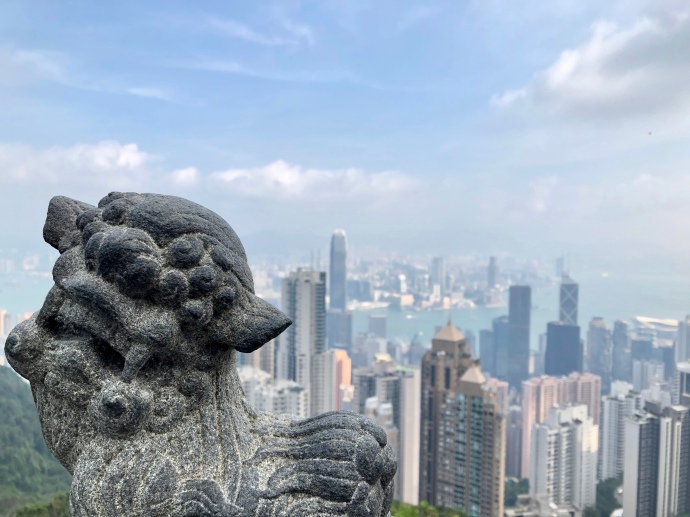 After selfies (like all good explorers), we decided to hit the road. We hiked toward the Pok Fu Lam country park, hoping nature would heal our eyes after walking past Madame Tussaud’s Wax Museum. (Obviously this is the most awful of all tourist stops in Hong Kong. Avoid the mall and the viewing station and the Bubba Gump’s and the Burger King and get onto the walkways. Get out onto the walking paths at once, or risk losing your soul.) 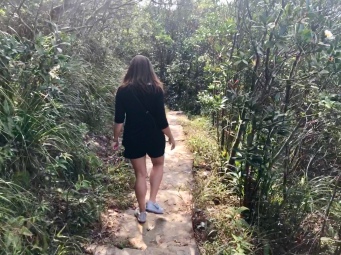 The path on a Saturday morning was highly trafficked, including a never-ending parade of students from a girl’s school—although it is a comfort to know you’ll never mean anything to teenage girls anywhere—but once we got about a mile in, it really opened up. We spent the rest of our trip walking downhill, which was pretty brilliant on our part. It was cool and green apparently this is the only place that ex-pats can run their big dogs, so the hike down was awesome. All of this greenery and non-ADA compliant stair-work was to get to the reservoir. However. 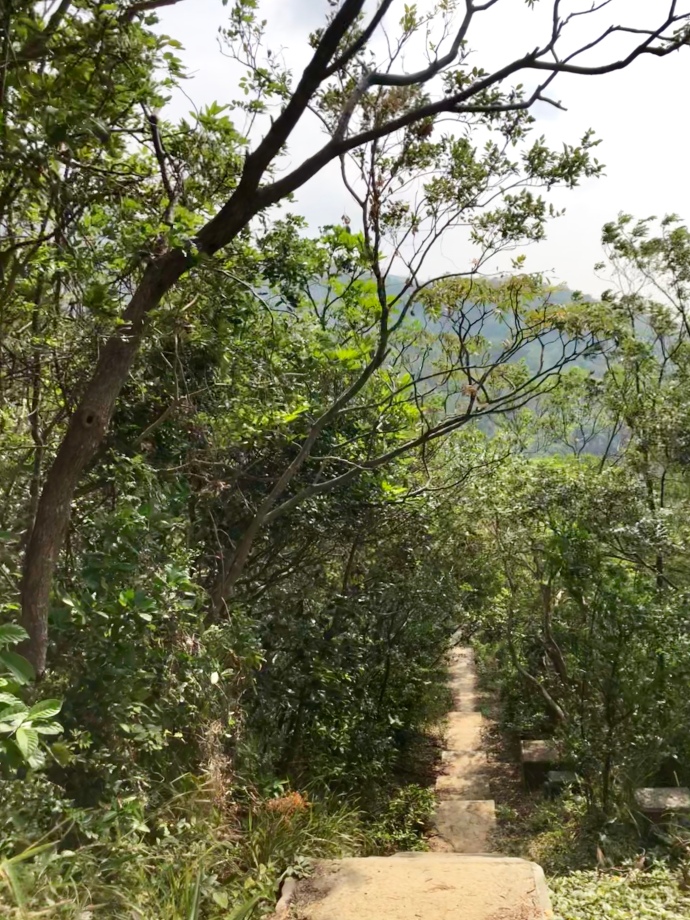 The reservoir sucked. Oh, lots of people were powerwalking around it, but there was nothing there but a pit toilet and mosquitos. We tried to scramble down to the water’s edge and got so discouraged by trash we gave up. Remember this: trail to Pok Fu Lam: good. Pok Fu Lam: bad. 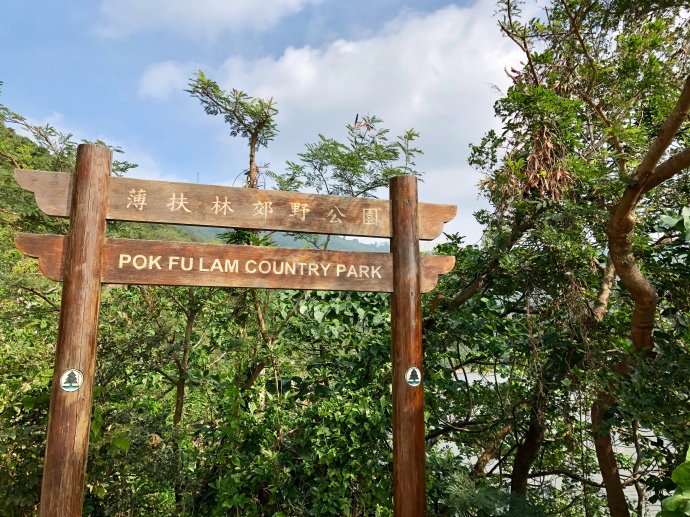 We saved our boom for someplace less likely to give us hepatitis and headed for the beach. We were on the back side of Hong Kong now, looking for the bays that make this place a world-class destination. We started in Deep Water Bay, which a local recommended as the best place to swim. 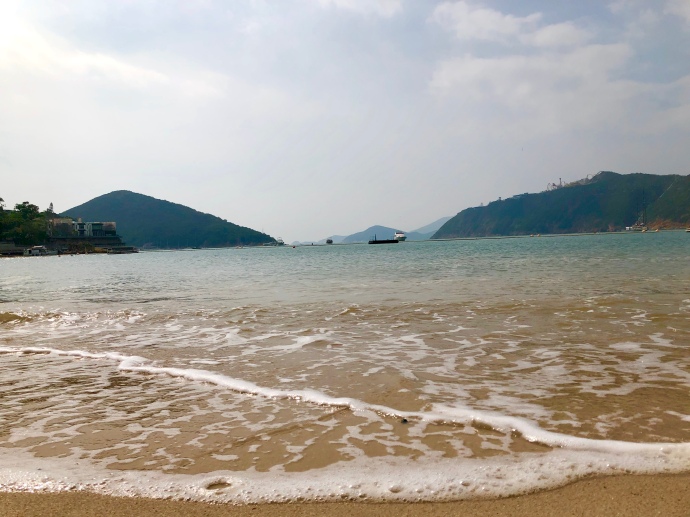 He probably wasn’t wrong. It was calm and quiet and only locals in the beach. We drank half our boom wine and reveled in the tranquility. Then we got hungry, so we walked a quick walkway to Repulse Bay.

Compared to Deep Water Bay, Repulse Bay is the Pleasure Island in Pinocchio. It’s a fun combination of smoothie shops and Italian restaurants in a bright pink line across the beach. You can tell it’s a real sh!tshow at night, even safely during the lunch rush, like we did. Everything’s expensive and everything’s in English, despite the huge crowds of Chinese tourists that pour out of buses here.

We watched these buses. The people got off in full pants and shoes, all black clothing and cameras, and stood on the shore. That was it. They took pictures like their dental-hygienist conference bus dropped them at the wrong locale: no bare feet, no rolled-up pants, no fun. Just fully dressed adults taking pictures of people standing in the sand. They didn’t buy food at the restaurants, they didn’t go in the water. They stood and then they left. Such a strange way to enjoy a beach. 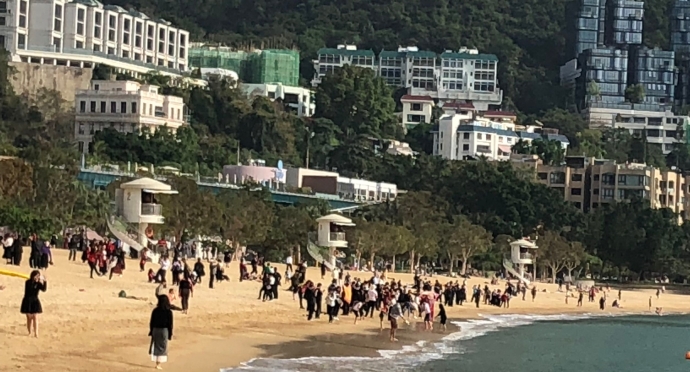 But WE weren’t like them. Probably because we were hungry. We walked up and down the boulevard and ended up at a place with a certain atmosphere. A certain je ne sais quoi. A place with seats.

In keeping with the “beach resort in China” feel, it was Amalfitana, an Italian restaurant. But we ordered a zucchini Parmesan and a tricolore stacked like a poke stack, and six Peroni mini cans to take onto the beach. The food was under-seasoned but plentiful and the beer was ice cold. It was just what we needed after rambling down a hill all day.

We took the last few beers and went onto the sand. We drank them with our toes in the water, watching the overly clad tourists and trying to think of when we’d had a better day. We never did come up with a good answer. 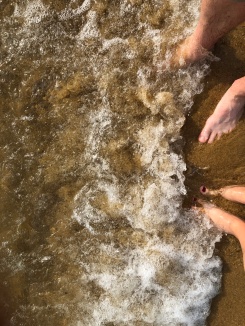 In the South China Sea 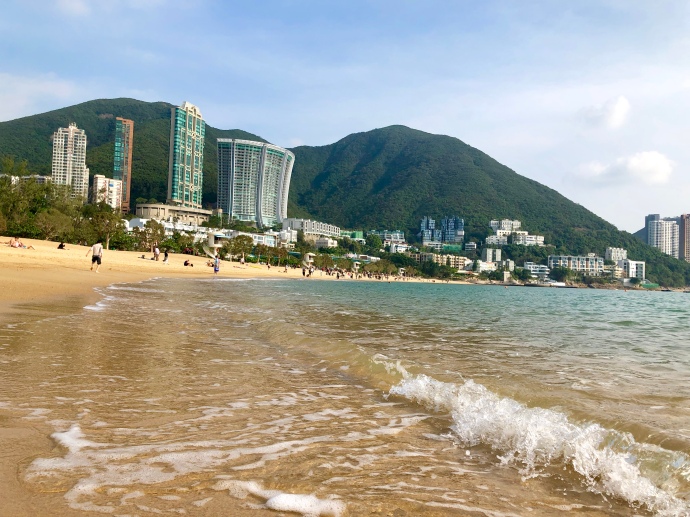