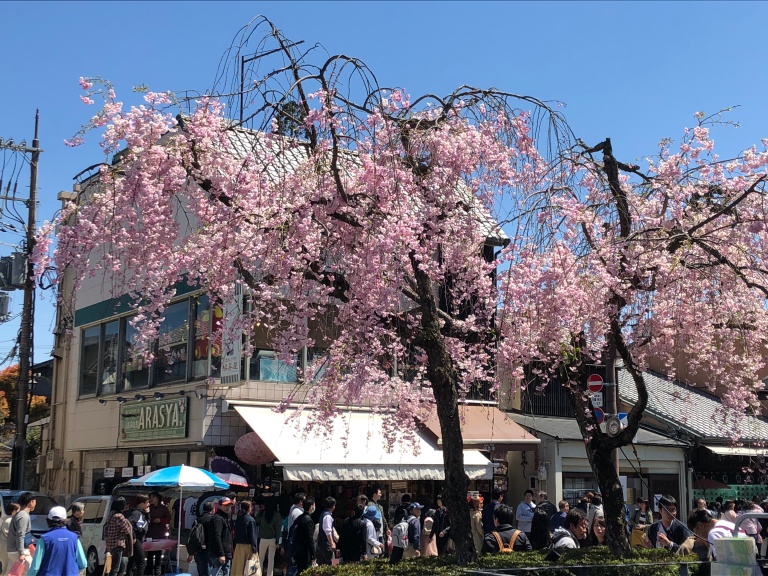 It had been ages (six weeks!) since we went anywhere, and Rick and I were getting itchy. This adventure, we were smart enough not to go somewhere cold, and instead crossed two important items off our bucket lists: Japan (Rick) and Cherry Blossom Season (Katie). We ate nothing but sodium and carbs, we walked too much and slept too little, and it was one of the best trips of our lives.

We flew nonstop from Seattle to Osaka on Delta, where we had a truly lovely 11 hour flight. Easy peasy! Too much fun to sleep! Oops!

But landing during the afternoon made it an easy transition. We caught a shuttle bus directly to our hotel, checked in, and went out for food and beer. We met up with a friend in the Dotonbori area of town, a brightly lit, popular street full of food and bars and many, many people. 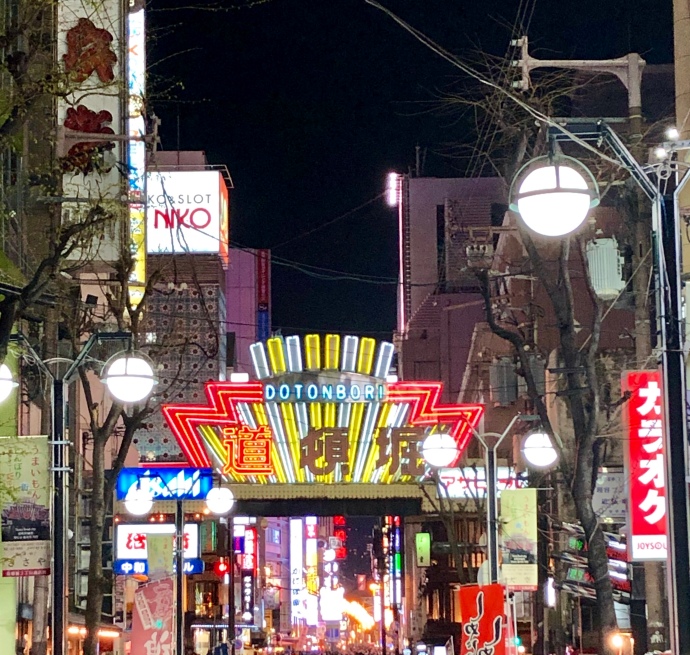 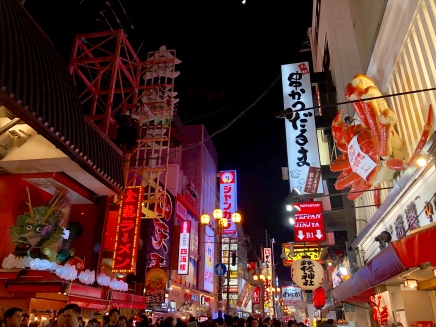 Dotonbori is also known for its wacky shop signs (giant sushi, anyone?) and the Glico man, who has been running victoriously over the city for 80 years (Glico makes Pocky. Bow down.) 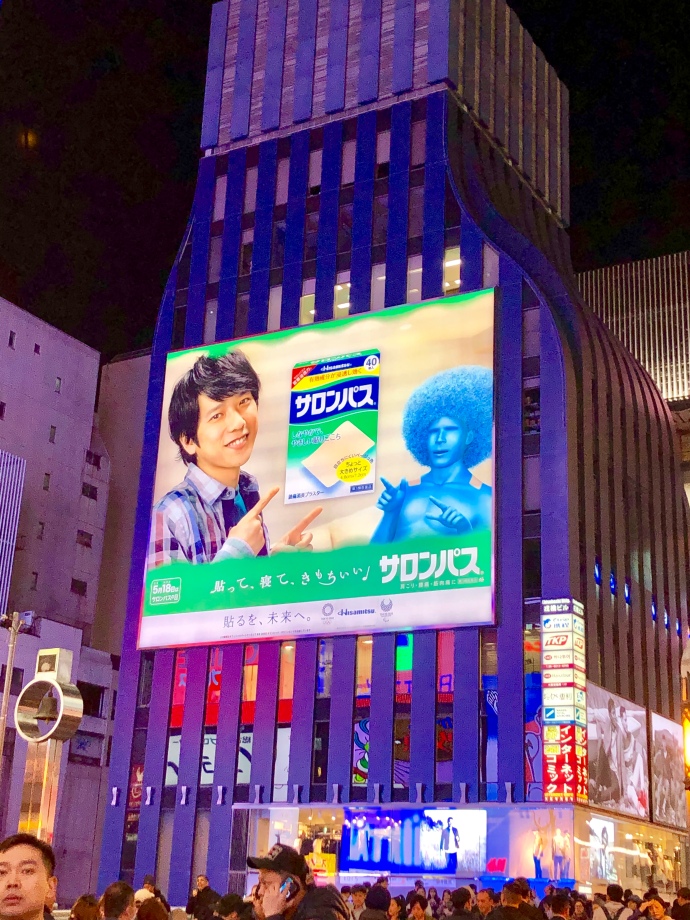 Street food is popular, although most places are small restaurants that sell directly to pedestrians. Ice cream and takoyaki (octopus balls), are the most popular. Although we missed out on ice cream (still bitter), takoyaki started in Osaka and we had to try them. 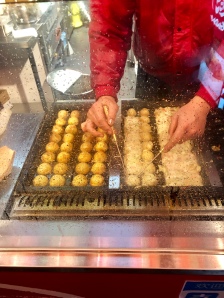 We capped off our night with one of my favorite meals of the trip: vending machine ramen. Okay, technically we ordered from a vending machine and a real cook made our ramen, but it was a new experience for us and that ramen was SO. GOOD. 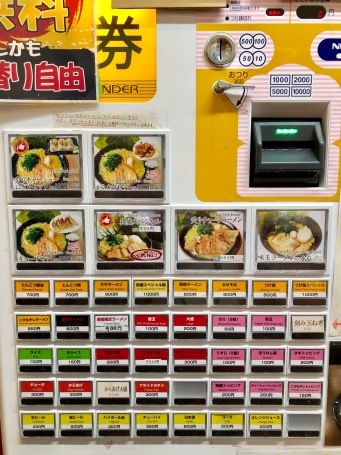 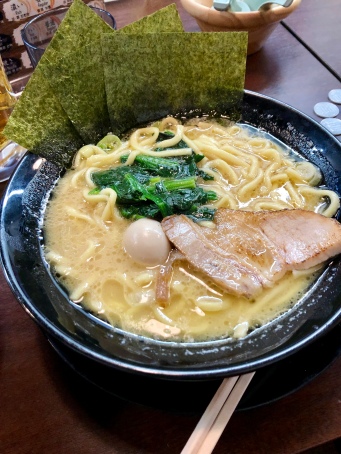 The next day, we got up and headed to Arashiyama, a small village outside Kyoto. We maaaaay have taken the wrong train in a different direction first, but public transportation in Japan is clean and quiet and we didn’t have any real problems getting there.

Except for this one train. The train from Kyoto to Saga-Arashiyama. Rick and I were some of the first to get into our car, and grabbed a spot against the front window. Thank the lord, because we would not have had room for our big American feet or backpack or lungs. The train attendants literally shoved people in the cars until they bounced back. 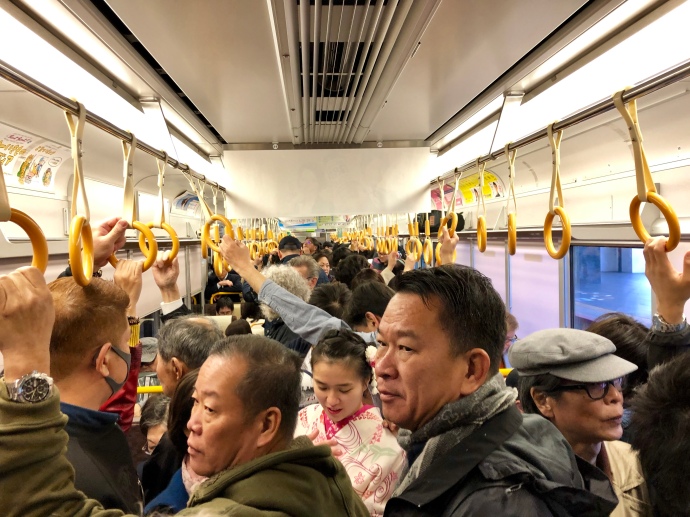 The kicker is, a quarter of these people got off on the first stop, which wasn’t even 30 seconds away.

But when we arrived in Arashiyama, we forgot all about trains. It’s a small, touristy village whose main crop seems to be ice cream, but it was gorgeous. We walked in the sunshine to the Bamboo Grove, and got a chance to see what it would be like to farm bamboo surrounded by tourists taking selfies. 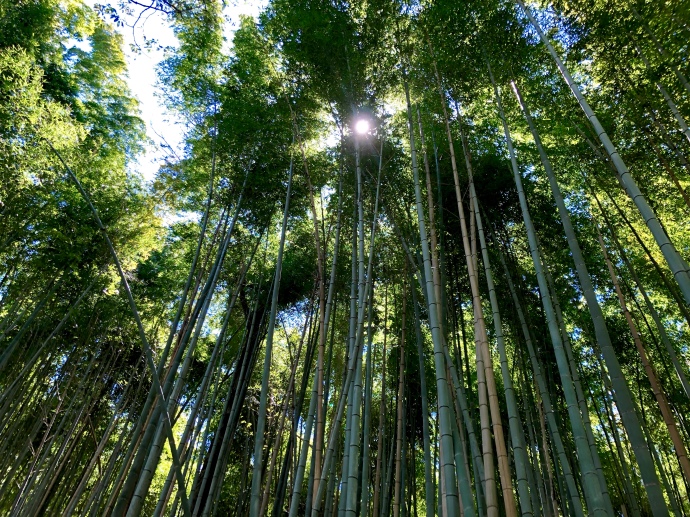 The forest air was cool and the bamboo heights pretty impressive, but it’s hardly a reason to visit a city. We moved further into town, where ramen houses and cherry blossoms and yes, more ice cream vendors, awaited us.

I debated telling you about this but figured you should learn from our mistake: do not go to the Owl Café. On a previous trip to Tokyo I’d been to a dog café and a cat café, and found them both to be reasonably clean and enjoyable, and wasn’t reluctant to try this one. But it’s totally different when you see the little padlocks and chains on the owl’s legs and you realize that you just paid money to endorse this kind of lifestyle for birds. We felt dirty and complicit and left quickly. 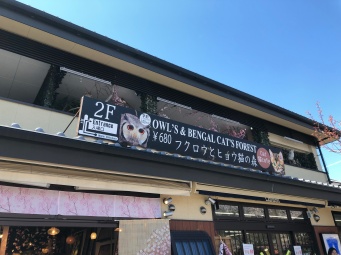 Fortunately, sunshine and alcohol are great cleansers, so we had a beer outside a (non-animal) café and watched the crowds stroll by. One popular thing to do in Arashiyama is to rent kimonos for the day and explore the town dressed up. While we didn’t do it, it made people-watching all the better. Most of the tourists who participated were Japanese, and if you relaxed your eyes a bit to blur out the Coach purses and selfie sticks, you could almost feel like you’d stepped back in time.

Spirits renewed, we headed to the Monkey Park.  This was such a better experience than the owl café—here, the Japanese macaque monkeys live and roam freely, and there are strict rules on how you can interact with them. But to really see the monkeys, you have to climb up Iwatayama on a steep path. Once at the top, there’s a feeding pavilion and an excellent panorama of the city. 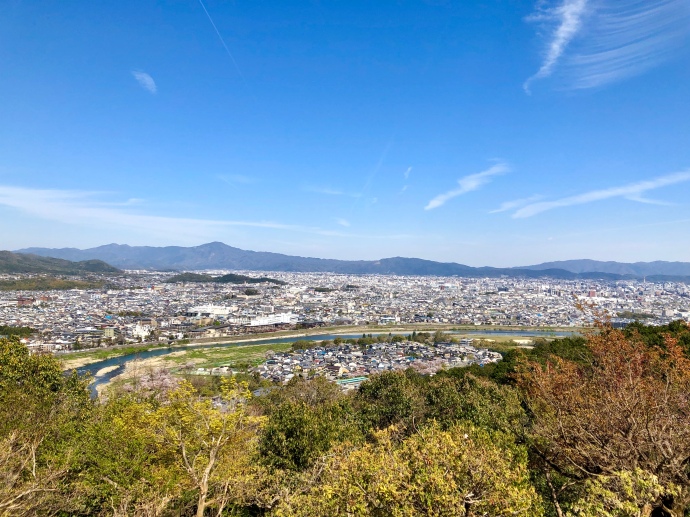 Here’s where all the monkeys hang out. These animals are technically wild but obviously comfortable with humans and being hand-fed. Like me in Las Vegas, they never stray too far from the buffet. 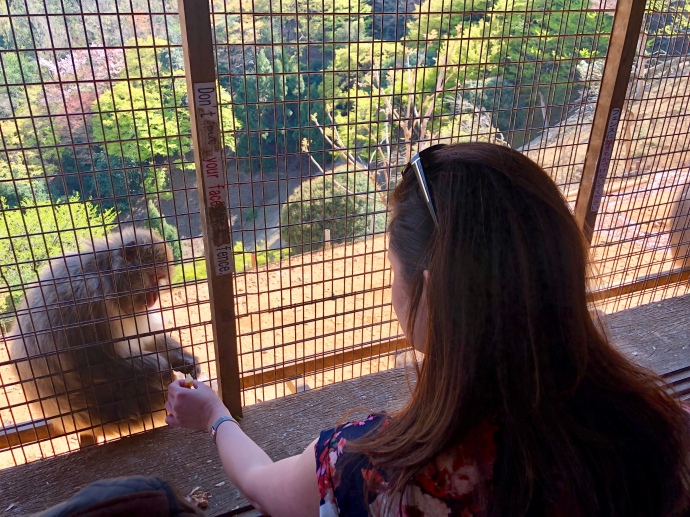 And also BABY MONKEYS! There were a few juvenile monkeys running around, which were cute enough, but there was at least one brand-new baby nursing with its momma and it was too precious for words. 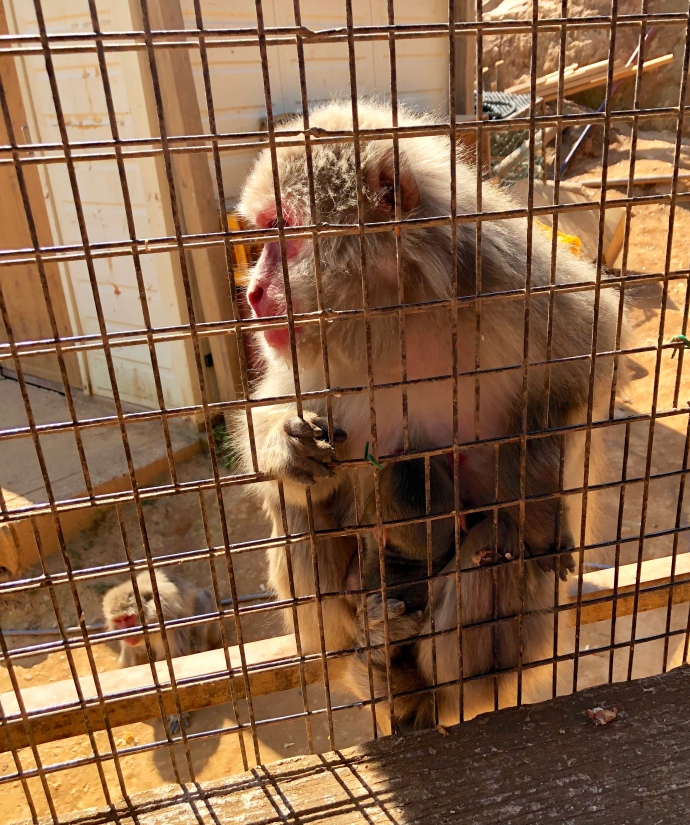 After the monkeys, we walked back into town to explore Tenryu-ji Temple. Originally built in the 1300s, the temple has been designated an UNESCO World Heritage Site, and it’s easy to see why. 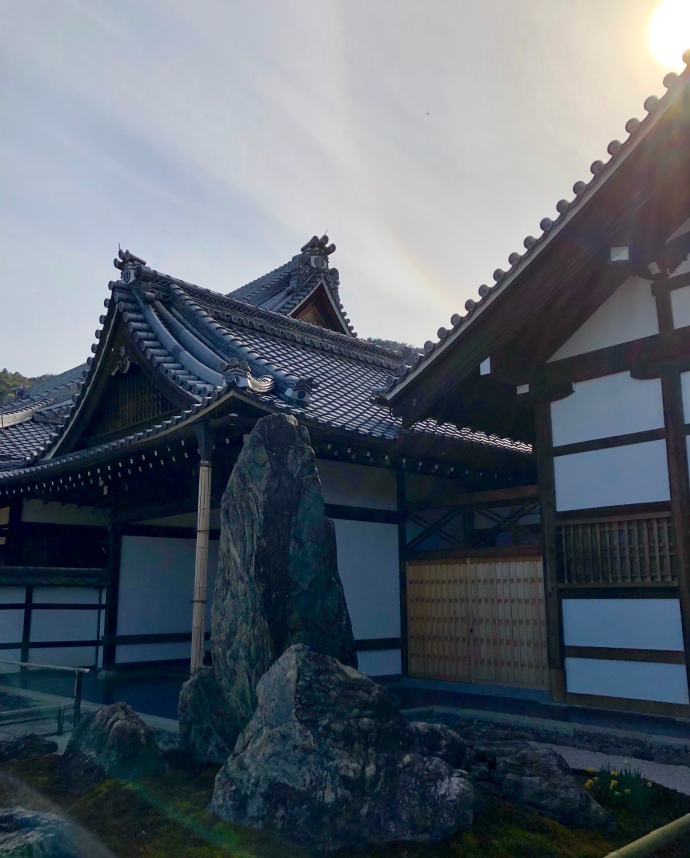 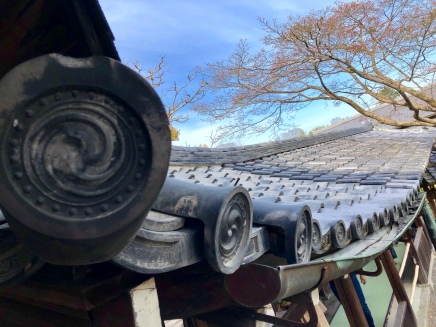 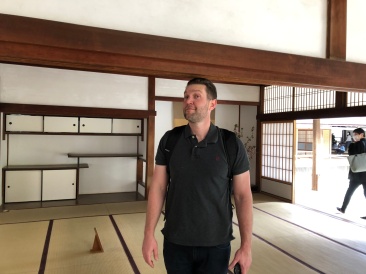 Some of us are more suited to temple life than others

The halls are serene and immaculate but it’s the gardens that steal your breath. In order to see both the temples and the gardens you’ll need two tickets, but do it. Or just do the gardens. Or just become a Zen Buddhist monk and move there, because that was immediately what I felt compelled to do. 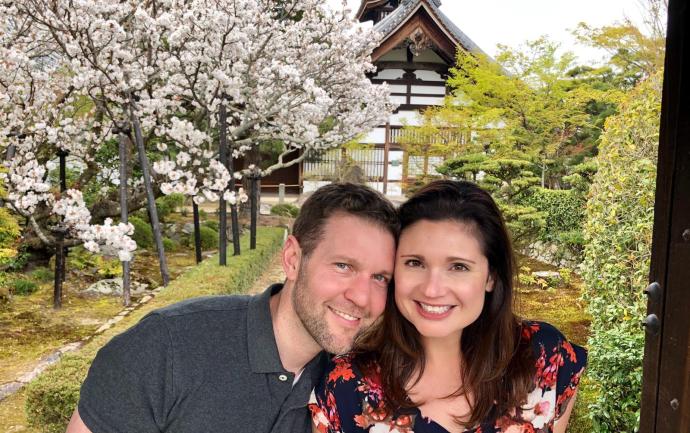 We lost our minds over the blossoming, verdant pathways. We breathed in the smells and the extra oxygen and took more pictures than you would have thought possible. I was on such a flower high that I didn’t even notice that we’d left the temple and made it to the train station.

A ten-minute train trip later and we were in Kyoto.

We walked to a small brewery, Kyoto Beer Lab, and had very American-tasting craft beers while we sat along a stream-bed and watched the cherry blossom petals float by.

Very peaceful, but then we realized that we hadn’t eaten all day, so we went around the corner to a cook-your-own-meat place.

Matsasuka Beef. Gawd damn this was fun. The owner was friendly and the local sake was delicious. Plus, all the meats! We basically had to throw out our clothes when we were done but it was totally worth it. One of our best meals in Japan, and that’s really saying something. 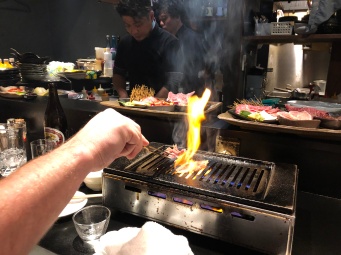 We rolled our drunk, smelly selves onto the JR line and got right into bed. Tomorrow we were taking on Tokyo.

AWK Tips for Osaka and Arashiyama

Get cash ASAP. As high-tech as Japan is, lots of small shops and restaurants only take cash, and the metro won’t take cards or big bills. Plus our Visa cards weren’t accepted in half the ATMs, so look for a 7-11 if you have a foreign card.

Dress for the occasion. If you’re looking to blend in, remember that the Japanese dress conservatively. It’s by no means a requirement like you might find in a mosque or Catholic church, but you won’t see any cleavage or knees or even elbows on the street. Bonus tip: allllllll their clothes are black, navy, white and gray, with the occasional khaki raincoat. Look like a local, or bring your brightest clothes and know you’ll stand out from the crowd.

Get familiar with the public transportation. Uber exists, taxis are clean, but by far the fastest and cheapest way to get around is via the many trains, metros, subways and bullet trains that crisscross the country. Consider getting a JR Pass. Also, we found that Apple Maps is far superior for giving accurate details on public transportation. It’ll tell you the route, the cost, if/when you have to buy more tickets, and the number of stops in between. It really helped with planning, and we felt more confident working out our plan before putting it into action in a busy train station.