After our monkey business in Osaka and Arashiyama, Rick and I took the bullet train to Tokyo. 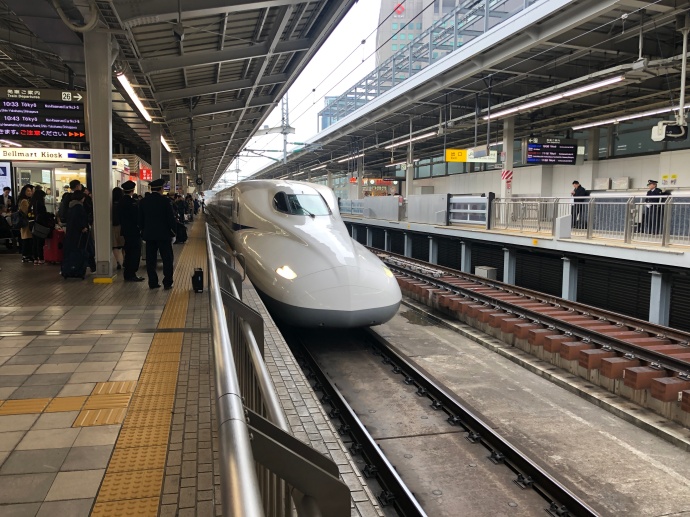 So fast! So hideous!

Hotels in Tokyo were still charging cherry-blossom prices even though cherry blossoms were hard to come by in mid-April. Rooms were going for thousands of dollars a night. But we, loyal Marriott guests that we were, found a good deal at The Moxy. The Moxy is new and aggressively millennial. Deliberately mismatched lobby furniture, photo backdrop walls made of stuffed animals, and of course, the lobby DJ, screamed hipster chic. Chalk art on the ping pong table and in the elevator begged guests to tag the hotel on Instagram. The staff was only allowed to smile ironically.

“You don’t need a concierge. Just ask the DJ.”

Still, despite the in-your-face insistence on fun, the hotel wasn’t without its charms. The rooms were clean and the beds were great, the staff was helpful, bike rentals were cheap, and the location was good. We used our hotel credits for lunch at the small café (called, for some reason, Pimp My Noodles), and headed to our room for a nap.

Once we finally woke up, we got familiar with the Tokyo metro and headed out to see the sights. We hit up the Shibuya neighborhood first. We weren’t in the mood for shopping, but it was interesting to see the self-fulfilling prophecy of the world’s busiest intersection. Up to 1,000 people cross the street at each light, but the more people you tell that, the more likely they are to show up to cross the street… It was a flood of people, to be sure. We were probably the only non-Japanese to not video our way across the intersection. No regrets—it’s just people walking.

This is just an intersection

After Shibuya we walked to Harajuku. We were too late to see the Rockabilly kids in Yoyogi Park, but we did have the amazing experience of feeling like the only people in Tokyo. It’s one of the world’s busiest cities and we were able to walk several blocks without seeing another person. Surreally quiet, and on the perfect spring night. It did not go unappreciated.

The Harajuku neighborhood is surprisingly charming. You may only be able to own a shop there if you have a hair salon or a creperie, but the small meandering streets are a welcome respite from Takeshita Street.

Here’s where the action is! Flashing lights and crazy clothes and only desserts—everything is extra-sweet here, even the punk stuff. But it was fun. Sugar-high or not, everyone was in a good mood. Families strolled down the street eating (what else?) crepes and everyone was as bubbly as their boba. We were there too late to see much of the Harajuku girls, the namesake women who dress in extravagant, over the top costumes. Part cartoon, part drag-queen, there is no such thing as too much. We saw a few but were too shy to ask for pictures, and the surreptitious ones never come out as well. 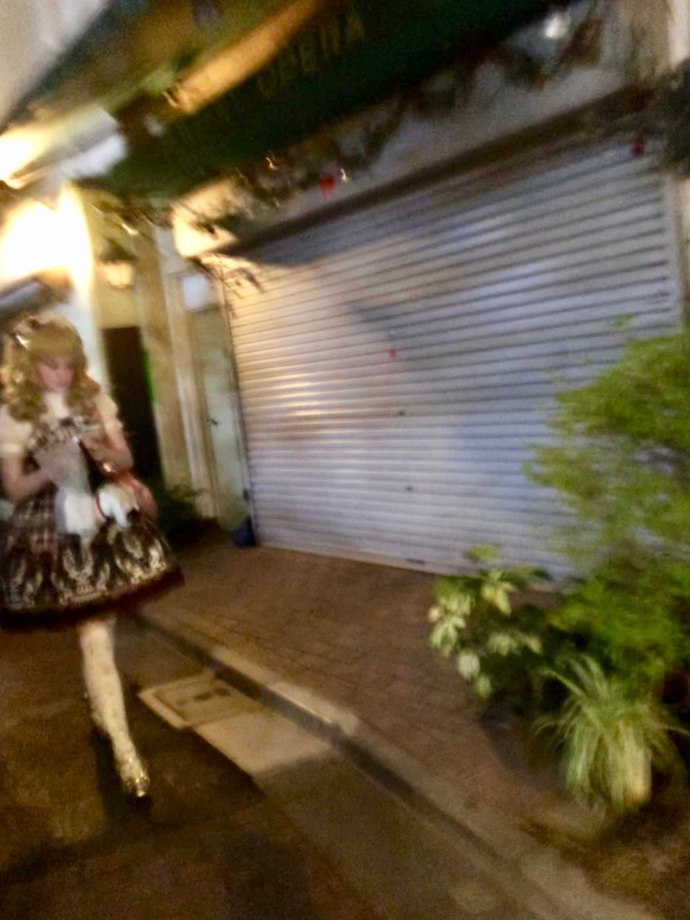 Sweet-tooth aching, we headed to Shinjuku for dinner and drinks. This is another lively nightlife area (people do not stay at home in Japan). Not too far from Harajuku, it is a much more adult scene. We tried to get into the Robot Restaurant—sold out—but lost ourselves in the bright lights and wandered into tiny sake bars. The area is perfect for drinking and people watching, but not eating. Eat somewhere else. 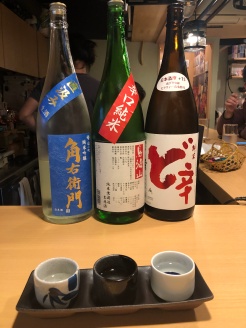 Or, maybe do what we did and feel let down by the area’s restaurants and stop at Lawson’s for one of Anthony Bourdain’s “little pillows of love,” the egg salad sandwich.

HOW IS THE BREAD STILL SO FLUFFY?

The next morning, we rise-and-shiners headed out to the Tsukiji Fish Market. Or at least the old one. The famous wholesale fish market moved to a different part of the city in October 2018, but the cramped, cacophonous market area is still there, and still worth visiting. Even though we’d just eaten breakfast, we gorged on fresh sashimi and flame-grilled tuna, while marveling at the idea of paying $30 for 12 strawberries. Nothing in this market was cheap, but there’s something thrilling about eating raw fish on the street—not a breakfast you’ll find many other places. 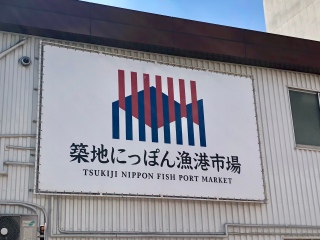 Won’t tell you what we paid, but it was worth it

Yes, seriously, about $35 for a dozen strawberries

Not all of it was great. I’d be remiss if I didn’t show you this.

Whale meat is illegal in the States, but not in Japan. As curious as we were, we couldn’t bring ourselves to pay money for it and endorse whale hunting.

But besides avoiding eating Willy, the smartest thing we did was to buy supplies and go on a picnic. We picked up salmon and tuna sashimi, as well as a few oysters and beers, and headed to the nearby Hama Rikyu Gardens. It’s an oasis of calm outside the bustling Ginza shopping district. After paying the small entrance fee, Rick and I wandered the gardens until we found a spot to eat. When faced with equally compelling views, we managed to turn our backs to the blue of Tokyo Bay and eat looking toward the few remaining cherry blossoms in the city. 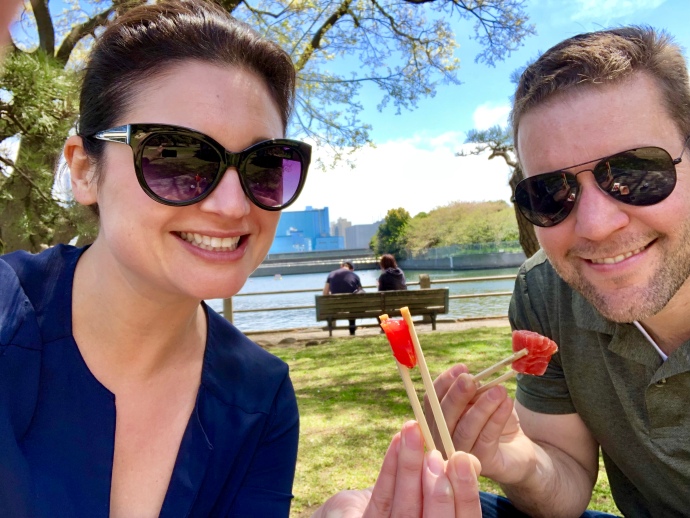 This was absolutely a highlight of our trip. We were far enough from the path that people could admire our foresight and jealous of our activities without being able to get close enough to interrupt them. The ideal position! We sat in the sunshine and ate the world’s best sushi while being hypnotized by the sway of the cherry blossoms. I have had a lot of perfect moments in my life, and this one ranks way up there.

But we weren’t done yet. Hama Rikyu Gardens also has a water-taxi stop. We managed to leap onto the boat at the very last minute and take a sunny ride up to Asakusa. The trip took half an hour, and we glided under bridges and past parks, and felt very proud of our decision not to take another train. 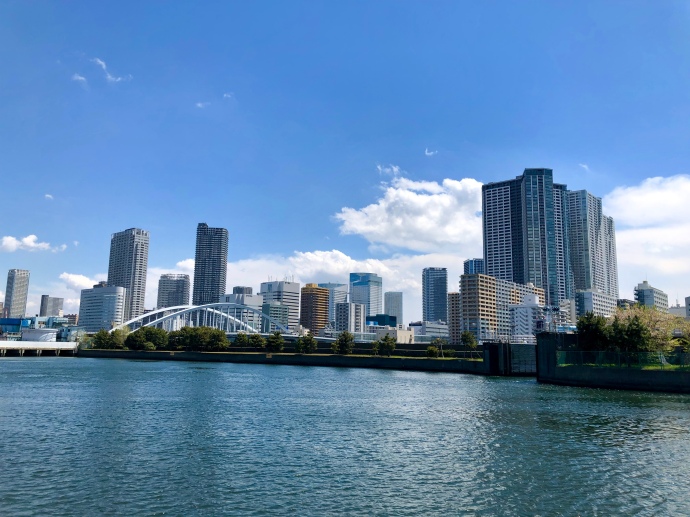 Our view from the boat

Boat was a little small in places

We didn’t have time to explore Asakusa’s temples or its shopping, but as we were walking that direction, we did manage to share a beer flight at Asahi Beer Hall, under its striking gold flame. 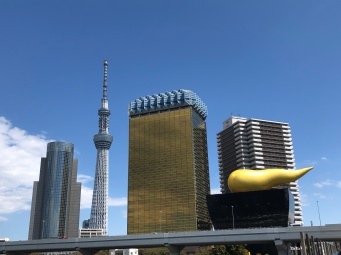 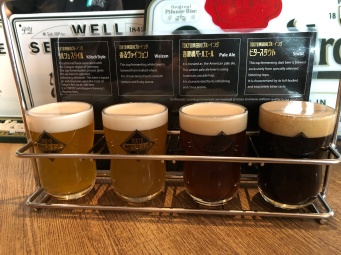 Then it was time to head out. We managed another peaceful urban walk back to our hotel, and then jumped on the next express train to Narita Airport. There’s so much more we still want to do (Samurai museum! Sumo matches! Omakase!) so we will definitely be back soon.

Save the date-ah. Everything in Japan has free internet. The trains, the restaurants, the malls…God’s truth, the vending machines offered free wi-fi. I will admit that being able to use data for mapping and subway planning was helpful, but if you’re on a budget, skip spending $10 a day on your cell plan and put that money toward ramen.

Fish indoors. The goods sold outside in the market are easily three times more expensive than the fish sold in the adjacent indoor market. Sample outdoors (that’s why you’re here, right?) but buy your food indoors.

Get back to nature. Tokyo is busy. Busy and sterile and often formidable. Break up your trip by visiting the many parks, gardens, and pathways that whisker the city. Once inside the immaculately tended grounds, you’ll forget about the chaos of the city entirely.