In our continuing quest to hit all 50 states, we headed out to Arkansas. I’d been to Fayetteville once before for a conference (cute town!) but in general there wasn’t a lot compelling us to hit the Natural State other than our checklist. Fortunately, I discovered the one thing you can do in Arkansas that you can’t do anywhere else in the country: hunt for—and keep—your own diamonds. So off we went to Crater of Diamonds State Park.

We started by landing in Little Rock and drove down to Hot Springs to spend the night. The hometown of Bill Clinton, Hot Springs is in fact an old town set up around bathhouses and gambling, both of which are in decline. We headed down to the Historic District but got distracted by wine tasting. Specifically (though we’re still not sure why), grape wine tasting. 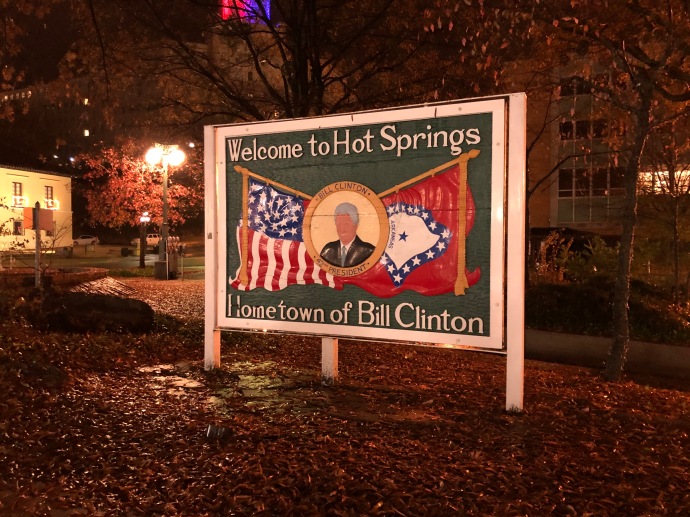 While they do grow grapes in Arkansas, the woman pouring our tastings started with “Do y’all like sweet wines or dessert wines or semi-sweet wines . . . or dry wine? Dry wine? Oh dear. Well, good thing it’s free.” The wines at The Winery (yes, that’s what it’s called) had names like the Big Kahuna and Texas Delight. We fought back fears of adult-onset diabetes and tried what ended up being reasonably drinkable wines.

No one was expecting them to be good, and they weren’t nearly as bad as some other domestic wine-tasting we’ve done (Maine, you win on that front). Sweet, yes, but not unquaffable. And nine tastings for free dollars is about what you should expect to pay for wines made with Concord grapes. Honestly, I recommend giving it a try. We even bought a bottle of the Big Kahuna to boom in the state park the next day.

We took our sugar high down to the Historic District of Hot Springs, settling in at the Ohio Club. It’s the oldest bar in Arkansas, and survived Prohibition and gamblers to become a classic haunt for live music and craft beers (in my favorite story about the place, during Prohibition the two-story bar became a successful speakeasy by making the first six feet of the entrance into a cigar shop. Like it was normal to own a 60-square-foot store and no one who ever lived there or had visited would think anything was unusual. +10 points for originality.)

Our bartender suggested we have our next drink at the Arlington, the region’s historic, high-end hotel. Frankly, we found nothing high end or historic about it, so after wavering in the corner for a minute, we took a walk down the street to admire the bathhouses. 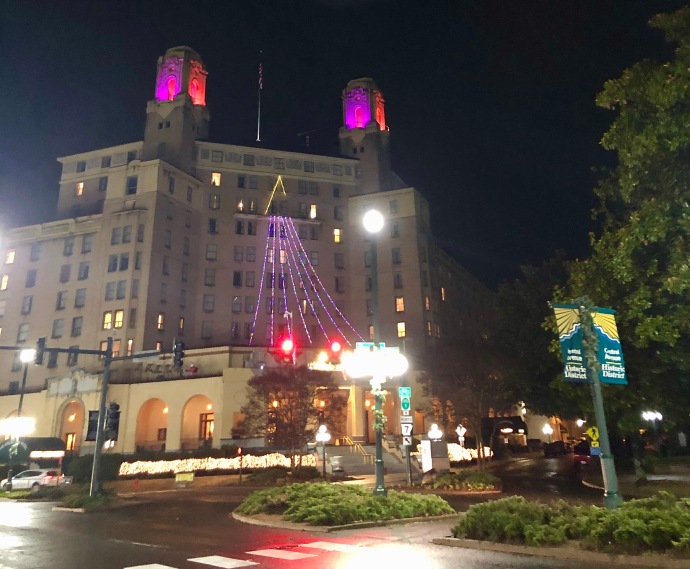 Most of the bathhouses in Hot Springs are now National Park cultural centers or museums, but a few houses remain. In general, they’re beautiful buildings with porticoes and stained glass, and are worth perusing. The historic bathhouses twinkled in the drizzle as we walked along window-shopping—and also as we found the public fountain that is pumped full of literal hot springs. An especially nice find on a 40-degree night!

It was too late for a spa treatment and too early to start bathing in public fountains, so we headed down to Porterhouse for our fill of prime rib dinner and homemade bread, and rolled back to our hotel to rest up for mining.

Like I said, Arkansas is the one place in the United States where you can mine for, and keep, diamonds on public land. In Murfreesboro, an hour or so east of Hot Springs, we pulled in ready to get dirty and woefully unprepared for how cold it would be. I begged the Peruvian llamas on my sweater to keep me warm, we rented some basic sifting equipment, and away we went.

It had rained the night before, which is generally a good time for the park’s brown, yellow, and white diamonds to be found on the surface of the park. Make no mistake, these are industrial diamonds: no one is putting them in a ring after they find one, but what a totally random way to experience a new state, right? 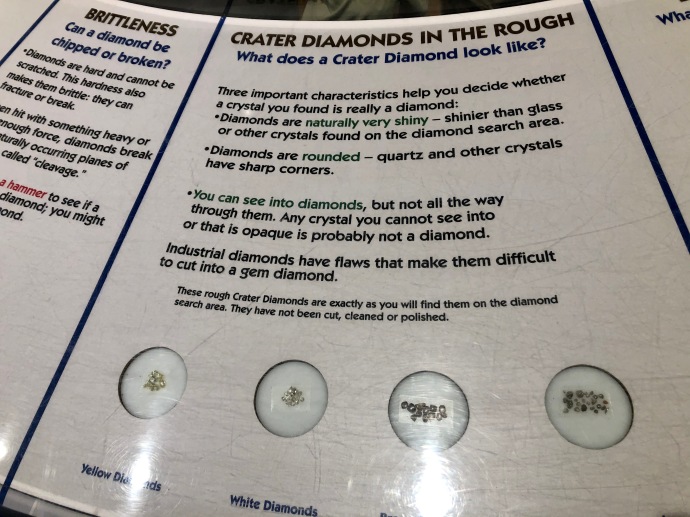 The park was filled with families in rain boots out to have a good time. It was such a fun atmosphere—ten year old boys bring ALL the enthusiasm to rock hunting, and more than once we heard, “Dang it, Ethan! I paid a $45 deposit! You can NOT do that to the buckets!” We found a quiet area definitely chock full of expensive diamonds and began sifting.

How to Mine, Sort of

The park rented us a small shovel, 5-gallon plastic bucket, and small and large sifter. We each bought a pair of waterproof gloves that offered zero assistance in staying warm but were invaluable in staying dry. After that, we were on our own. We picked a spot where diamonds might be freshly exposed after the rain and scanned for jewels like the freezing-cold novices we were. Nothing jumped out at us, but we commandeered a puddle to do our own wet sifting—a clever and efficient move that ultimately proved fruitless. 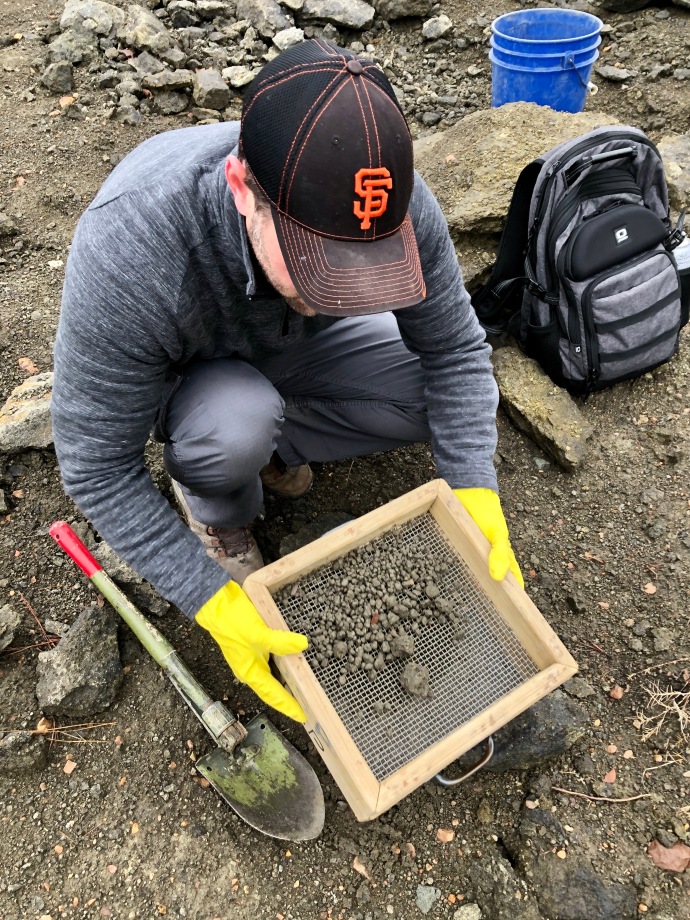 After the puddle failed to produce a diamond worthy of retirement, we followed the rain water through the mini-streams formed by the plowed furrows after the rain to look for anything sparkly-but-not-sharp-and-not-muddy-but-not-see-through. It’s exhausting and dirty work, trying to extract your future from the ground!

Mostly, though, we messed around, trying to stay warm and keeping our eyes open for anything that might glisten in those brief moments when the sun peeked through. We took a bucket of mud over to the sluicing baths in order to properly wet-sift our loot. I think you can guess that we were very low-key diamond hunters, but some people take this very, very seriously. Those people may have found brown diamonds, but they weren’t nearly as focused on where they’d go for lunch, so who won that day, huh? Huh? 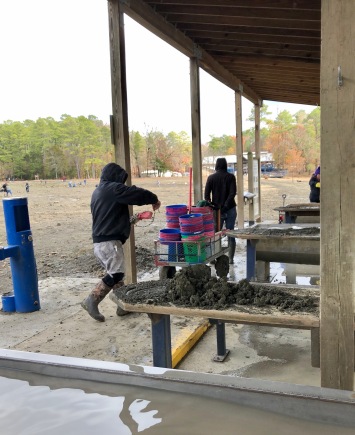 People who actually found diamonds, AKA not us

In all honesty, those real miners probably did. We went to Murfreesboro, the nearest town, to eat lunch, and ended up arriving during a power outage. We ate enormous burgers in the dark and then took our muddy selves to Little Rock. But we really did have a great time. Casual effort is our thing! We love caring deeply about a hobby we’ll never do again! We may have come out without any diamonds, but it was a genuinely fun day. Like Rick said, “it’s like gambling, but at least we’re outdoors.”

Rent equipment at the park. We were able to get everything we needed for less than $20 for the pair of us. If you’re flying in, it’s infinitely easier to rent than buy and haul out.

Bring mud clothes. Between squatting in, shoveling, and sifting wet mud, we got filthy. The park has places to hose off afterward, but waterproof shoes are essential.